Securing the PropTech Cyberspace – Is it impregnable?

A decade ago, the presiding ideology of PropTech would have been passed off as either a work of fiction or fascination. Reports published by SICOS (2019) validate this notion, stating that only $20 million were invested globally in developing the technological capabilities of real estate in 2008.

Now under a new alias (i.e. PropTech) and augmented by novel contrivances and technologies, $4 billion have been devoted so far in bootstrapping startups through seed rounds all across the known world.

In the UK, the second generation of PropTech was already in full swing three years ago, threatening every element that was once perceived as conservative and/or slow-moving within the property industry.

If successful, industries with custom-built environments may not be as utopian as originally perceived by many.

The Intricate Workings of PropTech

The PropTech movement can best be understood through Figure 1. In principle, it is the use of cutting-edge strategies and appliances that remedy and enhance the usability of properties and any property related transactions by revolutionising: 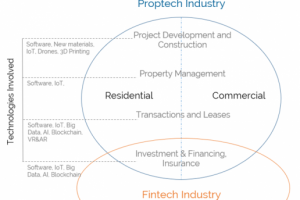 FinTech, or the reiteratively enhanced mechanisation of financial services, currently oversees the disciplines of Investment, Financing, and Insurance exclusively within the realm of PropTech and is rapidly progressing to cater the remaining three avenues (i.e. Transactions and Leases; Property Management; Project Development and Construction) both in the residential and commercial sectors.

A crucial point to note in the figure above is the involvement of IoT on all 4 levels. Therefore, even though the current PropTech industry consists of players outside and inside the dominion of FinTech, yet, all yearn to utilise and perfect the incorporation and serviceability of IoTs.

AND for good reason as well!!!

The promise to interconnect, crystallise, and systematise communication with all “Things” through the Internet is indeed an arduous yet a worthy endeavour. 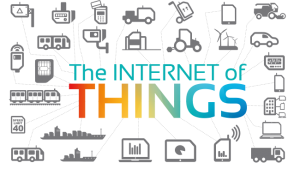 5 years ago, the prospect harboured by the Internet of Every-Thing was estimated to be nearly $10 – 15 trillion by Cisco (2014), nearly the size of the US economy.

Moreover, Cisco stated that they will only be able to target around 6% of it!!!

With 99.4% of the devices yet to be installed in the coming years, a significant percentage will be employed to augment the PropTech movement.

“Real estate is the pre-eminent asset class which will be most impacted by global monetary conditions and major investment activities”
Yolande Barnesm, Head of Savills World Research (Hackett, 2016)

Fortune Magazine estimates that the value of the entire real estate industry is $217 trillion (Hackett, 2016). Compared with 6 trillion dollars’ worth of gold that has been mined to date, developed property even dampens the significance of gold by a factor of 36 to 1!!!

IoT enables the leveraging of such developed (i.e. commercial and residential) properties through the elicitation of sensory-based performance and environmental data, quality improving cost-cutting procedures, seamless automation of both living and working environments together with the enhancement of customer experience.

We as a species are now heading towards some major revamps and redesigns for the sake of sustainable interoperability of nodes (electronic devices) that shall gel the very backbone of IoT and through it – influence the trajectory of all presiding and future generations of PropTech (Cisco, 2014).

“The Internet of Things is not a concept; it is a NETWORK, the true technology-enabled NETWORK OF ALL NETWORKS.”
Edewede Oriwoh, Cybersecurity Consultant (Marr, 2018)

As any system or “network of networks” is as strong or as weak as its constituent elements, Internet for IoTs, and consequently PropTech, is of significant value. Currently, it is the internet that predominantly hosts the cyberspace of the PropTech revolution and therefore it has inherited both its strengths and weaknesses.

“Think of IoTs as analogous to the Internet in 1995”
National Association of Realtors (White, 2015)

But the question arises, how strong or vulnerable is this cyberspace?
Well…

“8 out of 10 start-ups fail even before they are launched”
Ganesh Ramamoorthy, Principal Research Analyst at Gartner (Jha, 2016)

“90% of the consumers do not trust IoTs because of the lack of security”
Gemalto, World Leader in Digital Security (Roe, 2018)

Read more about the vulnerabilities of the internet here,

Now the nascency of the technologies at play is certainly playing a major role in facilitating a lot of these deterrents.

However, there remains a prevalence of design flaws; programmatic and protocolled inefficiencies; deficient engineering and an ever-rising probability of cyber-vandalism. 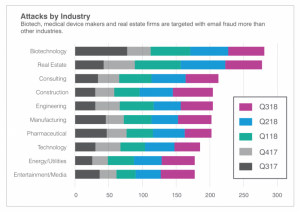 Particularly, real estate is the second most targeted discipline with an average of 54 attacks per company witnessed in 2018 (see fig. 2). High valued transactions are frequently administered in the PropTech industry through a digital platform and a lot of public information is already available online for hackers to easily identify prime targets. Thus, the PropTech sector presents a lot of INCENTIVE for fraudsters to grab a piece of the action.

Even so, the most shocking development is not the existence of incentive behind the digital criminology but the opportunities present within the cyberspace that allows state and non-state actors to exploit the expansive computer network on multiple levels. These cybercriminals traverse each layer indiscriminately, well camouflaged to attack ceaselessly until the risk of being identified or when the investment of resources becomes too great. To identify threats and build up defences, real estate and PropTech companies rely on the efficacy of intrusion detection and protection systems, consumer patch management, viability of encryption technologies, operationality of the SOC (Security Operations Centre), and the employability of a meticulously devised CBRP (Cyber Breach Response Plan).

Nonetheless, the result obtained at the end was nothing but an overpriced cybersecurity bill, devoid of any form of assurance (see fig. 3) 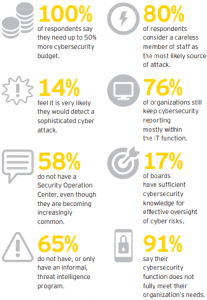 Threats to the PropTech Sector

The threats to the PropTech sector can be divided into three generic segments:

Cream of the crop that relies on their own research and develop their tools on both the physical and the digital plane to bring the biggest organisations to their knees.

On top of these attacks, the situation is exacerbated by the CISO (Chief Information Security Officer) and CEO divide as detailed in Figure 4 below

“Eventually, customers find themselves with multiple siloes from multiple vendors that don’t interoperate, are not cyber secure, use different protocols and generate more complexity at a greater cost.”
Kevin Bloch, CTO Cisco (Reichert, 2017)

As smart cities are the pinnacle of PropTech and IoT deployments, it serves as a great example to gauge the security status of the digital dominion and the “complexity it generates at greater cost”. The concept embodies ubiquitous connectivity between people, vehicles, homes, commerce, and industrial sector to structure a complex M2M (Machine 2 Machine) Decision Making Processes (i.e. getting rid of the human operator to process the data and thereby improving speed to make accurate decisions) 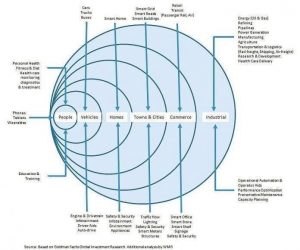 Figure 5. Planning a Smart City (would need this redone)

Where M2MD is an unavoidable feature of smart cities and the future of PropTech, it also acts as its biggest weakness. This is due to the rise of cascading errors. Cascading errors point out the potential of small unchecked mistakes that eventually coagulate to form a systemic risk.

Imagine a smart electricity meter sending inaccurate data to the control centre. In response, the control centre does what it is “supposed” to do – issue an automated action on the faulty assessment resulting in the further increase of the power supply and thereby incurring more costs for a business. Furthermore, advanced to emerging levels of attacks – such as DDoS (Distributed Denial of Service), Ransomware, and Sybil attacks – can cripple an entire city’s grid, sabotage homeowners in their residencies, and coerce governments to meet their demands or face destruction. The disruption of the physical world by losing control of the digital world to espionage can yield disastrous consequences for “smart” citizens and serves as a living nightmare for any aspiring PropTech entrepreneur.

That is why Wired UK claims that Smart cities are an absolute dream for infrastructure cyberattacks, with a prominent professional hacker and cybersecurity futurist, Cesar Cerrudo, promising (Manaugh, 2019):

“The Worst Is Yet to Come”

In light of the colossal levels of threat and unique risks faced by PropTech industry, security is generally provided to the smart city ecosystem through three cardinal attributes (Deloitte Insights, 2019):

The point of CONVERGENCE between (Informational Technology) IT and OT (Operational Technology) infrastructures wields the power to govern entire cities and is commonly used for monitoring and evaluating the various operations, devices, processes, and events comprising cyber operations. Yet the lack of security harboured within the sphere of Information Technology meets with the lack of interoperability within operational technologies to produce the presiding IoT systems that are ignorantly made susceptible for exploitation.

Change management and digital enterprising are on the rise where legacy systems are being reformed to incorporate digital technologies INTEROPERABLY. However, such a stratagem has proven to create significant risks. Both types of technological platforms are disparate, devoid of result-oriented security procedures and policies that are aimed at mitigating the hidden security vulnerabilities found within a smart city ecosystem. This results in the conception of non-conformity between different IoT enabled devices powering up a PropTech project whereby agencies and city departments connected with sensor technologies are using different communication protocols from one another. Furthermore, even the data generated is in different formats due to which much of the value of the data is lost the moment it is created.

Last but certainly not least, is INTEGRATION where social services, fire departments, law enforcement, public work, transportation, sewage, water, and power are all connected through a web of digital technologies. Such digital technologies lack the maturity to follow-up on the cybersecurity strategy that is normally devised and a holistic approach is largely absent to curtail the hindrances present when connecting digital and physical infrastructure on a large scale.

For most of the PropTech use cases, there exists a dilemma. The dilemma dictates that to attain interoperability, you have to relinquish security or vice versa. Therefore, solutions currently operational in the market try to necessitate an equilibrium between the two but largely to no avail. To realise the true potential of PropTech, the gold standard interoperability has to meet mathematical security assurances. That is why Mischa Dohler (2018), a wireless communication expert, calls for an atomised approach when devising the blueprint of a PropTech cyberspace. He states that the system must be broken down into constituent elements (i.e. functionalities) to recreate the system in parallel with the trust layer of the internet – Distributed Ledger Technologies. As various experts align their interests and expertise to power up the dream of IoTs and PropTech on varying levels of trust inducing platforms, experiences learned from the past mistakes shall serve as a reliable beacon to guide legal and system coders towards building a better and more sustainable digital future.

The software has to be decoupled with the hardware and the experience of the DLT must be seamless and invisible, underpinned by an ultra-low latency and ultra-high bandwidth 5G system. Thereafter, if the Internet of Skills is kept as a core functionality, in accordance with the emergence of 4th Industrial Revolution (i.e. industrial local networks) – customers shall be able to interact with their surroundings, forcing it to learn from their behaviour patterns and eliciting it to democratise labour like nothing ever before in the history of mankind. The potential is phenomenal and the time to repeat mistakes is gone.

We at Zisk Properties understand the cardinality of the situation and work with leading experts across the globe to devise solutions that aim to empower you with knowledge and assets that shall help you traverse this new world. Get Started with Zisk Properties on your investment journey and towards crafting your personalised and impregnable PropTech cyberspace.

Thousands of pounds have been lost to cybercriminals using the coronavirus pandemic to their advantage. Here is how to outsmart […] 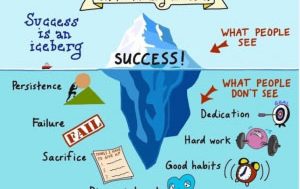 “Passion is energy. Feel the power that comes from focusing on what excites you.” Oprah Winfrey (Ellevate, 2019) Each one […]